On July 13 we left for our vacation. We topped up the diesel before we headed out. As soon as we had moored there the worst rainshower came over us and we escaped down below and just waited until it had stopped.

Well, that cleared up a bit, but it was in a bit of a misty weather we sailed towards Amsterdam and IJmuiden. So while we motored through Amsterdam, and I always need something to do, I made us some fresh baguette.

We made shrimp sandwiches. Yum!

We stayed for the night in IJmuiden Marina. Not a very exciting place actually, but we didn’t want to head out to the North Sea at night when the wind had picked up.

We left IJmuiden to to sail south on the North Sea. We had winds between 12 and 25 knots, and some uncomfortable swell, but we sailed along the Dutch coast steadily. 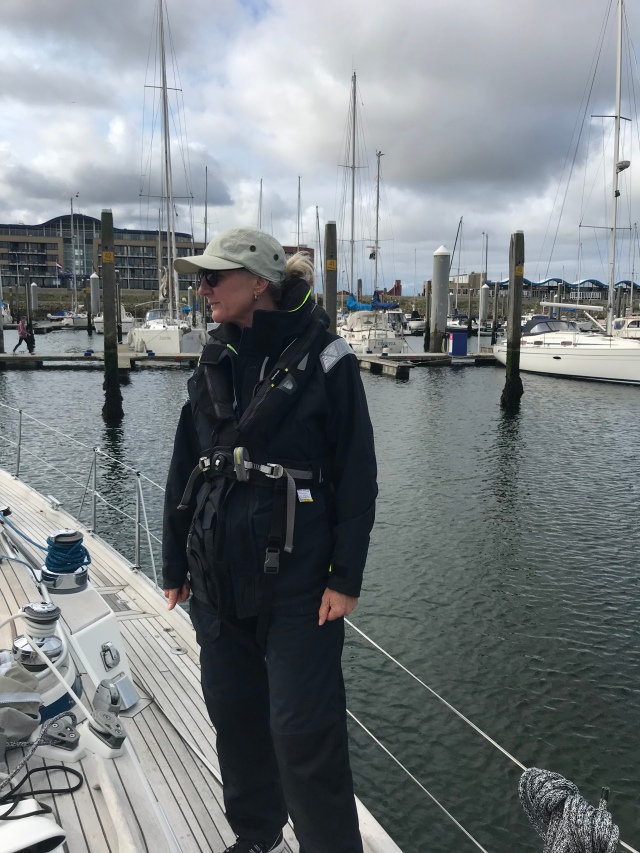 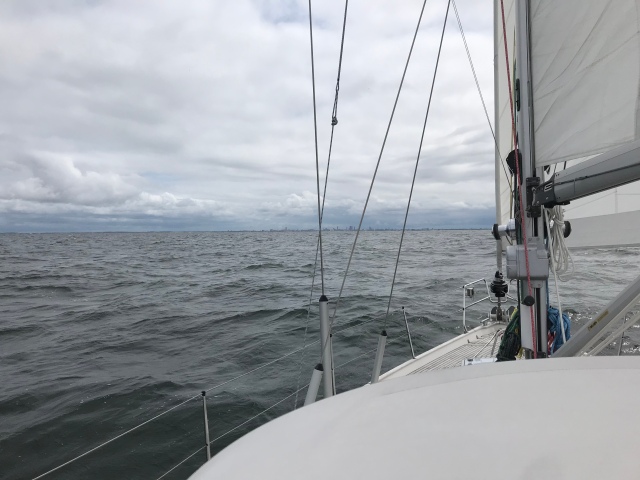 We moored in the very crowded marina in Scheveningen in the afternoon. We were the 3rd boat alongside, and it was very tricky to get in there among all the boats.

We rushed ashore to find a bar we could convince to turn on the Wimbledon final.

We enjoyed a fresh summer dinner in the cockpit.

As the boats inside of ours were leaving at 6.30 in the morning, we decided to leave as well. And it showed to be a wise decision. We headed further south past Hoek van Holland in the same crazy swells as the previous day. We had about 10 to 13 knots of wind and up to 2 knots of current with us, so we had good speed. We came into Goere lock at 11 to wait for them to open it, but they had suddenly decided it would not be opened until 2 pm! We had to wiat for 3 hours for this lock to open. Glad we left early. From here we motored through the landscape and went through Hellevoetsluis, a bridge that needed to be opened, before arriving in Willemstad at 7 pm. What a cute little town! We went for a long walk after dinner. 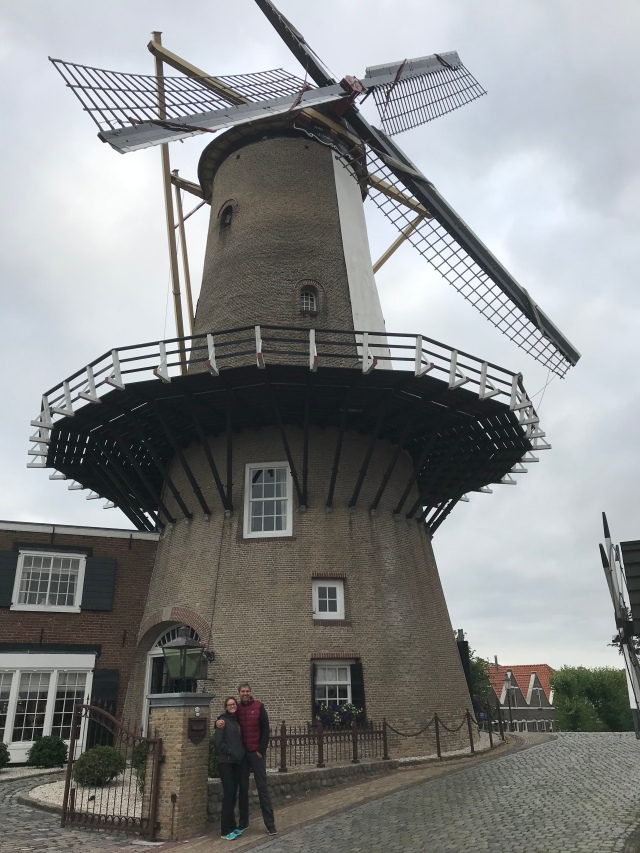 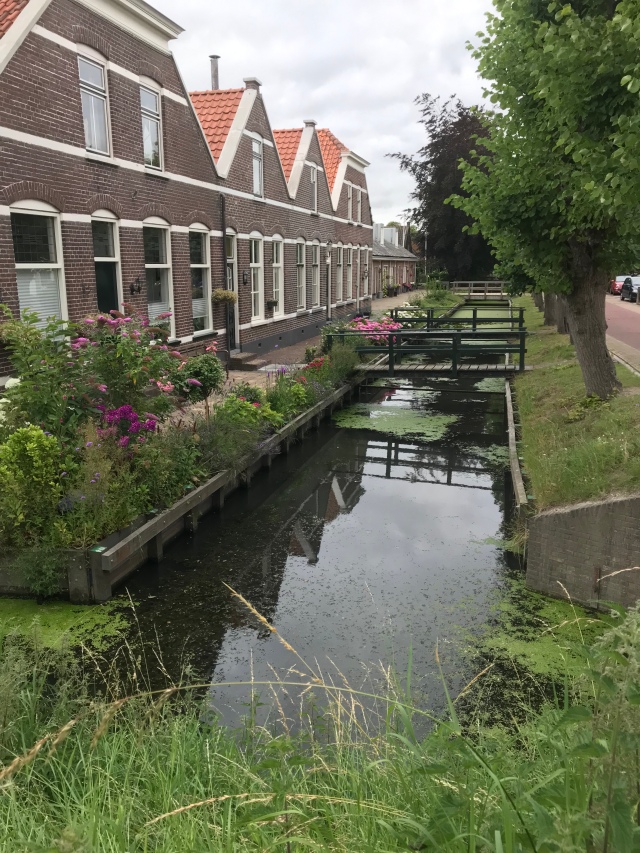 Before we continued our trip, we went for a walk around the fortification shaped like a star. The town was just waking up and as we came back to the marina the boats were leaving. 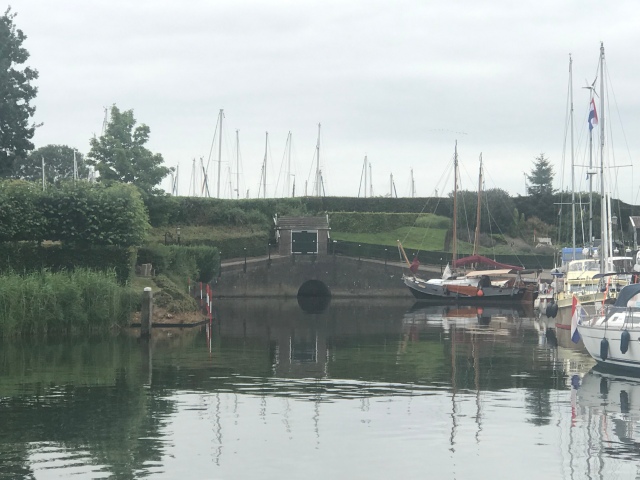 This was the day we finally could change our winter clothes to summer clothes. Going from sailing with fleece, foul weather gear and winter hats, we were blessed with sunshine and warm winds, finally! Motoring through locks and bridges and nice landscape we kept ourselves busy with reading, playing card games and baking. We arrived to our next destination, which was Yerseke.

The very old village of Yerseke has about 6,500 inhabitants. It is known for its aquaculture. They farm oysters and mussels since the 1870’s. Of course we could not resist tasting this delicious “Zeeuwse platte”! 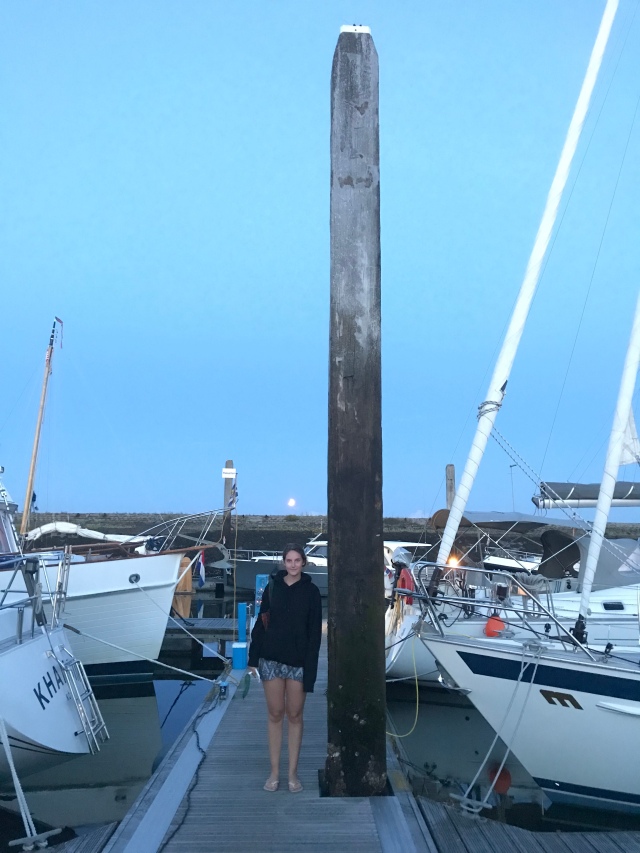 The tidal water differs with 4 meters!

In beautiful sunshine and complete calm seas we left Yerseke and motored through Zeeland to a town we have wanted to go to with the boat for a long time. Veere. We went there by car, and it is another one of the very picturesque towns in the Netherlands. We knew we had to come early, becuase it is a very small harbour. We moored alongside in the middle of town.

When the sun comes out we like to take out the solar oven GoSun to bake or cook food. This time we made cinnamon roll. 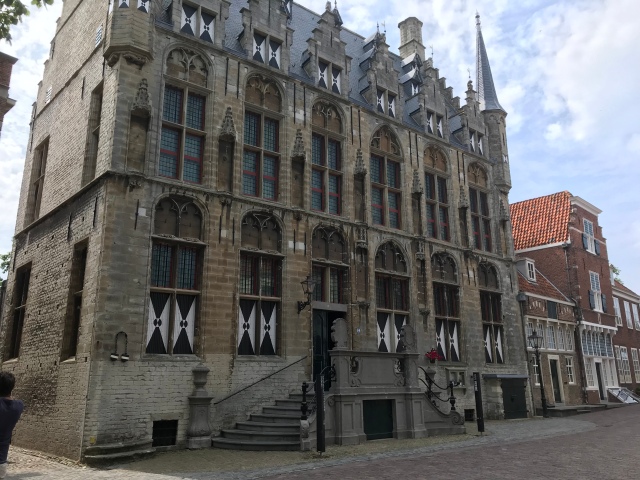 We went through the Kanaal door Walcheren, via Middelburg to Vlissingen. Six bridges were opened and we went through two locks, so the 10 NM took us 5 hours! We could have never imagines it would take such a long time! The last lock, Buitenkeersluis took us out to the North Sea again, before we headed into the Michiel de Ruyter harbour. We were not aware that during the few days we would be there, they temporary fair was in town. Constant music and noise from all the people and merry-go-rounds were quite annoying. 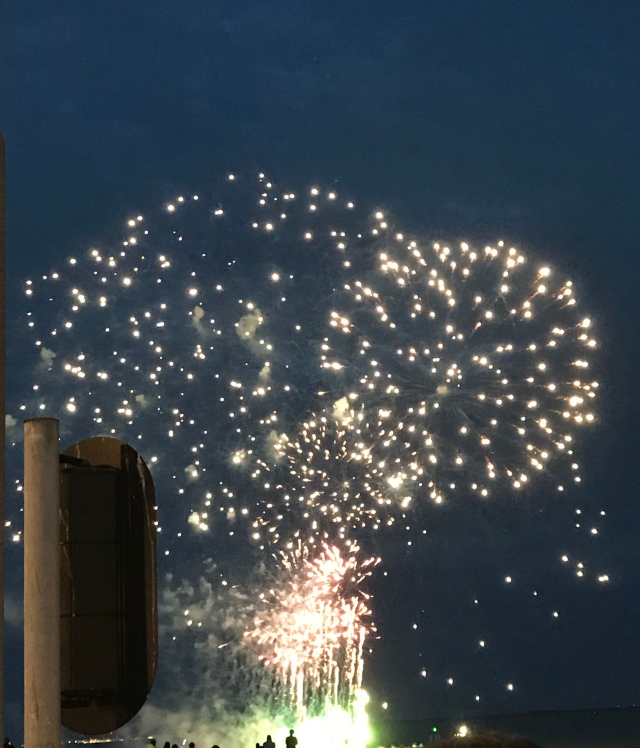 The town of Vlissingen gave us a firework show on the first night.

Unfortunately Ida had to go back home after a week with us, and we waved good bye as she got on the train.

We left Vlissingen for a day with the ferry and a bus to go to Bruges in Belgium. It is one of the towns we have wanted to go see, so this was perfect when we were so close to it. 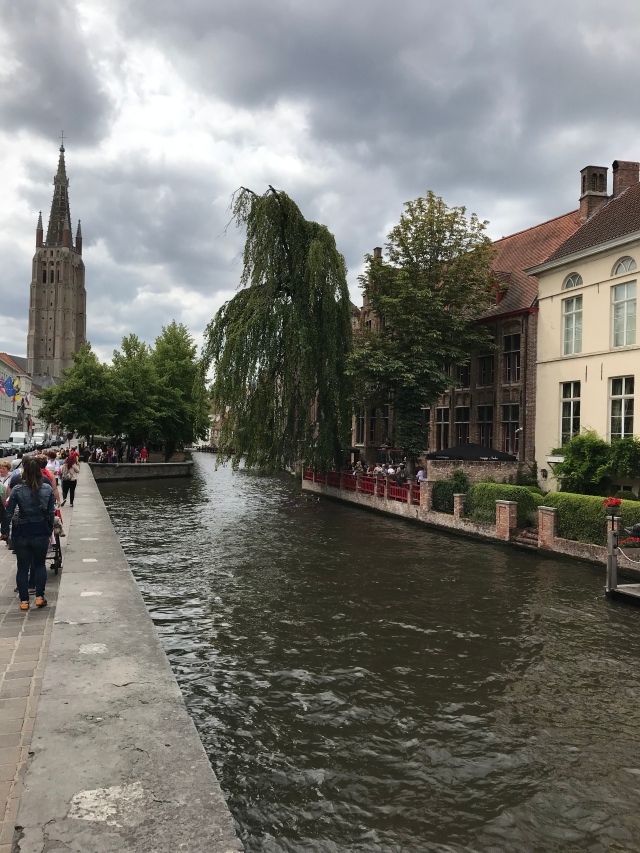 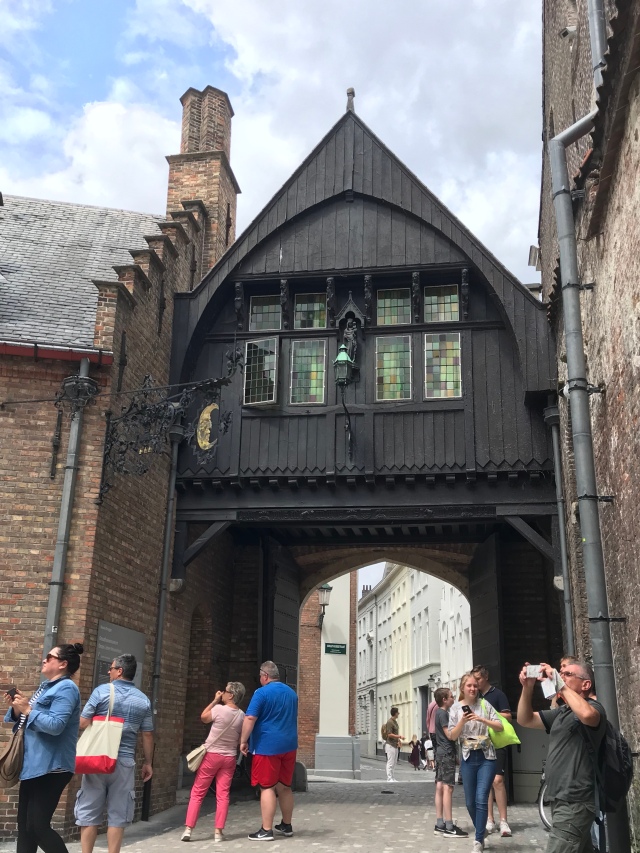 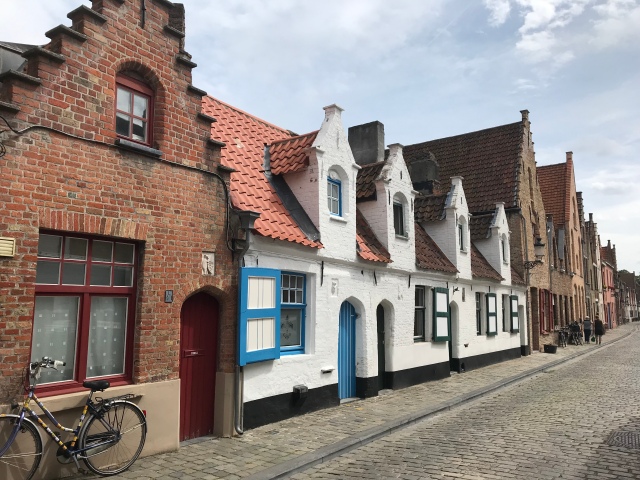 There was so much to see in this cute town, but we only had one day. We headed back the same way with the ferry.

Our son came and sailed with us. Although they are now grown up, we love that they like being with us on the boat. We came to the boat in the evening, met up with Staffan, who had finished work,  at the local beach bar and had a drink. We made dinner onboard, and had a beautiful sunset, as we so often do. We are so lucky. 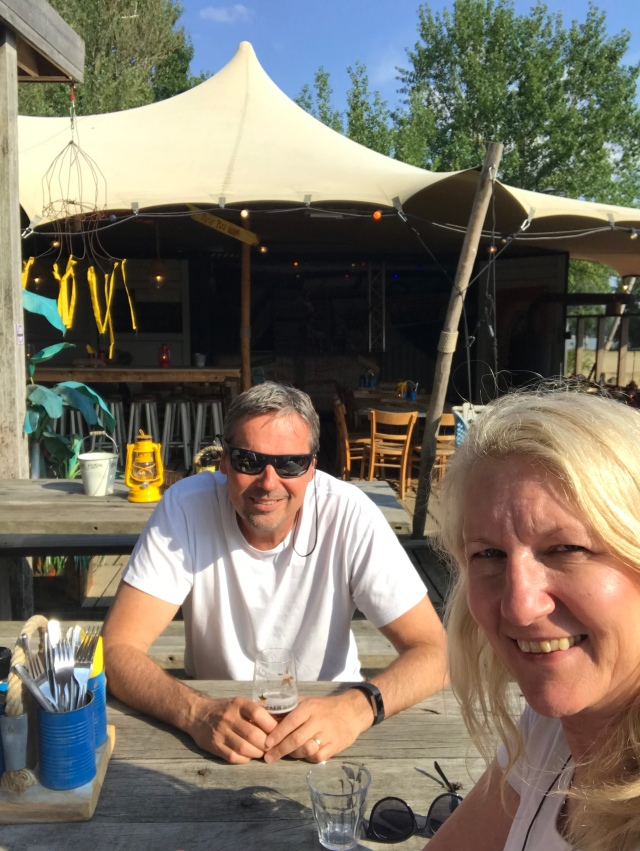 The following morning we went sailing for the day, as we all had some plans we could not be gone all weekend. It was nice and warm, the temperature in the water was already 19 degrees. With extra crew onboard we could trim the sails, and we came up in some really good speed considering our boat is quite heavy and not exactly a racing boat. 🙂 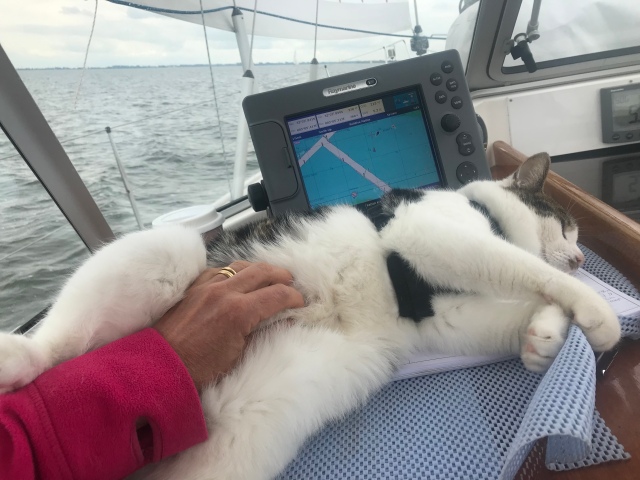 This crew is not as helpful, but very nice to have onboard!

We left our home port in the morning in beautiful weather. We were really eager to try our new gear for the rig. We went north and the light wind came from the south, so it was perfect for us to try the whisker pole for the genoa and the preventer for the main sail.  It was a perfect set up and great comfort sailing like this!

Last Thursday we went to Medemblik to Varuna. We wanted to come there in the eveninng to test all the new mast LED lights after our mast had been refitted. All worked well.

We brought the cats with us, and they adjusted well. I am not sure they loved it, but I think, if we are happy and calm, they will be too. They stay down below, and are not interested in moving around in the cockpit or on deck. We let them take their time.

On Friday we went through everything the riggers had been working on.

We have new standing and running rigging. That feels very good, safe and secure. We have installed a removable inner forestay, jacklines, a radar reflector. A couple of mast steps at the top of the mast. 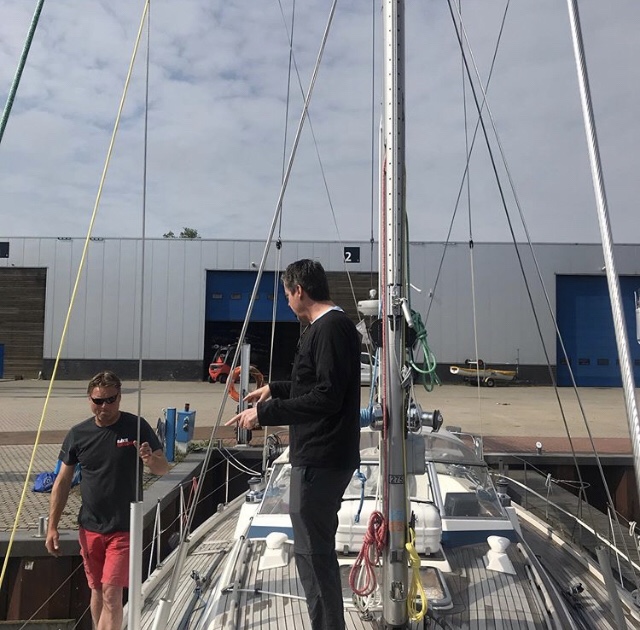 We have a whisker pole and a permanent preventer mounted on the boom. The gas spring in the rod kick has been replaced snd the electric furler for the main sail has been serviced. We are very happy with all of the wirk Rake Rigging have done.

We used to have a TV installed in one of the cupboards in the salon on our boat. Since we don’t watch TV, and could not really see a purpose in keeping it we took it out of there. And while this could be another great storage compartment, I felt I wanted to do something special with it. We had some wine glasses and dessert wine glasses on the boat already from the previous owner, and they were kept in their original cardboard box. Then we were gifted with these beautiful Hallberg Rassy cups, that we just could not keep in the regular galley storage.

My (Eva’s) second cousin who previously owned a Hallberg Rassy gave these nice cups to us. They are no longer in production.

We basically needed a special cabinet for our fancy stuff. So we installed a light that comes on then the cabinet door opens and two shelves from plexigalss which we cut holes in, in sizes to fit whatever we wanted to put in there. It turned out pretty good we think and it is a pleasure to open it and be able to use these nice items to make it feel more like our home.

This is the final result.

We have four fire extinguishers onboard. One in the forward cabin, one in the salon, one in the owner’s cabin, and one in the cockpit. They are most likely from 2005, when our boat was built, and we did not feel they are reliable anymore. So we decided to change them all. They are all powder extinguishers, and although that causes major mess if used, that is what it needs to be on a boat. 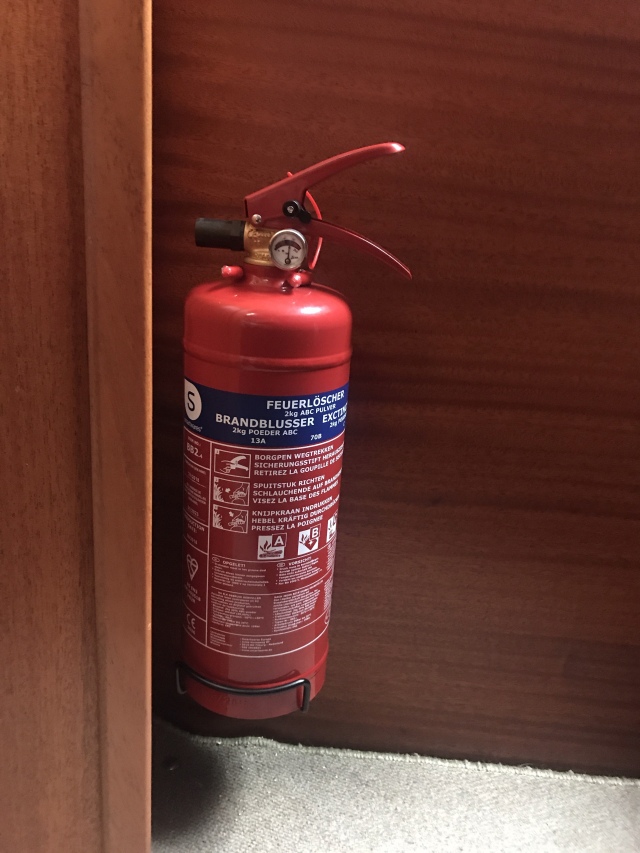 We also installed 4 smoke detectors, since there were none before. One is in the forward cabin, one in the engine room, one in the slaon, and one in the owner’s cabin.

In the galley we have a fire blanket.

We just hope we never have to use them!

We have put in some extra work on the hull the past few weeks. We scraped off part of the old antifouling, sanded it for a smooth surface and put a layer of primer Seajet 017 on the hull.

Then we painted the hull with 3 layers of antifouling Seajet 023. That is what is allowed to be used in the waters around the Netherlands. It was a lot of hard work but feels so good now that it is done. 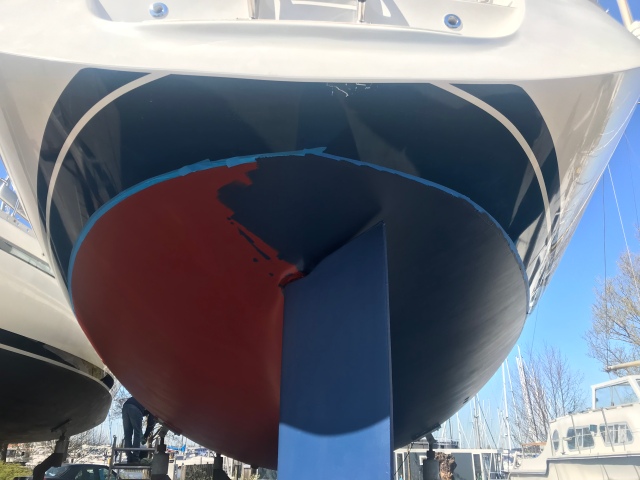 First layer of anti fouling we did red, the next 2 layers were blue.

Here the second layer is half done.

We cleaned and polished the hull. I (Eva) really dreaded doing that, since I did that on my own. My frozen shoulder wasn’t looking forward to holding a polishing machine for several hours. But it went much better and faster than expected. The weather was nice and “almost” warm that day, so now that is super shiny! Polishing the deck we’ll do later when the boat is in the water.

We have changed the stoppers on the gori propeller. Removing them was no problem, but putting the new back was a lot trickier! We tried several times before we finally put the rubber stoppers in hot water to make them more workable, and then it was quite easy to put them in place.

We have moved the propeller shaft a little more aft to make room for a rope cutter. It has been attached. 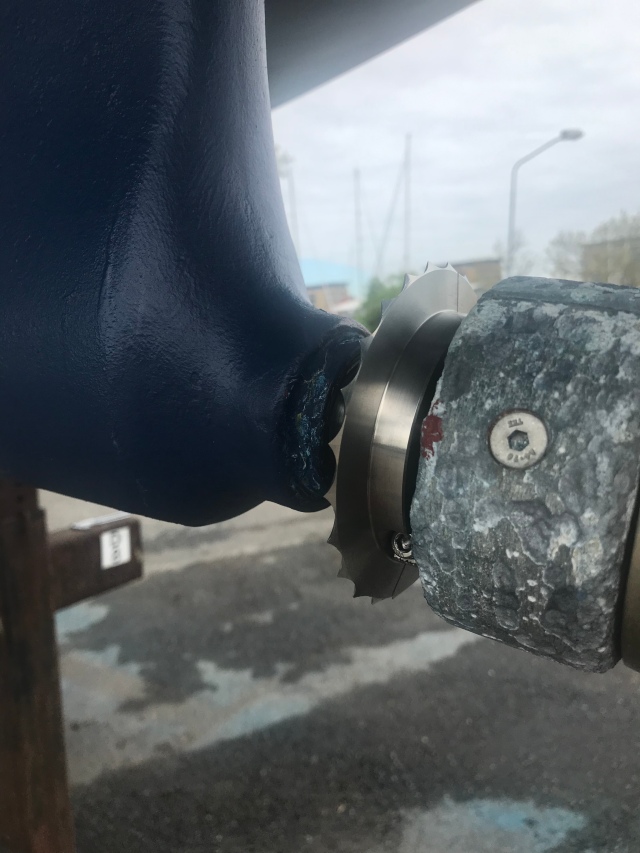 Search on our blog

Click on the link to see where we are!